For more than 3 billion people, fish is the primary and often irreplaceable source of protein; 800 million people live directly or indirectly from fishing.1)https://www.fishforward.eu/at/wwf-empfehlungen-fuer-fisch-zur-fastenzeit/ To feed that many people, it takes a lot of fish: worldwide, more than 90 million metric tons are caught each year, covering nearly seven percent of global protein consumption.

However, over the past 60 years, fishing has increased so much worldwide that around one-third of all fish stocks are overfished – in the Mediterranean, it is as much as 93 percent.2)https://www.wwf.ch/de/unsere-ziele/ueberfischung This means that more of these fish species are caught than naturally grow back as young fish. One of the main reasons is the heavy industrialization of fisheries: they now use fishing methods such as modern tracking technologies and trawl nets, which are used to catch huge quantities and can have a destructive effect on the deep sea and seabed.

To meet demand nonetheless, more than half of the fish consumed worldwide now comes from farmed sources. Yet aquaculture is by no means the solution to the problem caused by overfishing, because to produce a single kilogram of farmed fish, 1.5 to 8 kilograms of wild-caught fish are needed as food. This shows that fish farming is exacerbating rather than alleviating the depletion of fish stocks caused by overfishing.

Moreover, farmed fish are kept under precarious conditions. Fish such as salmon, for example, are crammed together in cramped spaces in the dirty water of their own excrement in breeding farms. Diseases are fought with antibiotics and a cocktail of various chemicals. As a result, fish farms pollute waterways and spread diseases caused by animal-hostile husbandry to wild fish.

Recent studies have detected serious and worrisome contaminants in farmed fish and marine animals, making farmed salmon, for example, one of the most toxic foods in the world.3)https://childrenshealthdefense.org/defender/farmed-salmon-most-toxic-food/ 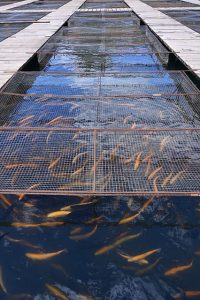 Thus, five times more toxins were found in farmed salmon than in any other food tested, including polychlorinated biphenyls (PCBs) and dioxin. PCB concentrations in farmed salmon were eight times higher than in wild salmon. Even polybrominated diphenyl ethers (PBDEs), flame retardants that are or have been used in many plastics and textiles, were found in farmed Atlantic salmon. They are now banned in many European countries and in some cases in the USA because of their negative impact on children’s development. The health risks associated with these chemicals include birth defects, neurological developmental delays, infertility, reduced IQ, hormonal disorders and cancer. In addition, consumption of farmed salmon has been found to contribute to various metabolic diseases such as type II diabetes and obesity.

Another serious problem is the dangerous contamination of farm-raised shrimp with antibiotic-resistant bacteria.4)https://childrenshealthdefense.org/defender/shrimp-most-dangerous-seafood-you-buy/ A study of shrimp purchased in Canadian supermarkets from Vietnam, Thailand, China, India and Ecuador showed that two out of ten packages were contaminated with such bacteria. Although the use of antibiotics in farmed shrimp is banned in Canada, the majority of shrimp are imported, from regions such as Asia and India, where the use of such drugs in farms is common practice. The “super germs” found are one of the biggest threats to human health and are expected to kill more people than cancer by 2050.

However, it is not only the desolate practices in the breeding farms that are causing trouble for the marine animals, but also drug residues from human medicine.5)https://childrenshealthdefense.org/defender/species-fish-contaminated-pharmaceuticals/ Researchers have found high drug concentrations in the blood and tissue of fish off the coast of Florida. On average, the fish were contaminated with seven drugs, and in one animal there were even residues of 17 different drugs. Blood pressure medications, antidepressants, prostate medications, antibiotics and painkillers were most commonly detected, but heart medications, antihistamines, antifungals, stomach medications and opioids were also found. In total, the scientists were able to identify 104 common drugs.

In addition, studies of 125 prey items (such as shrimp, crabs, and smaller fish species) from the first examined fish showed that they were also contaminated with an average of 11 drugs.

This dramatic contamination of fish comes mainly from human sewage, as conventional sewage treatment plants are unable to remove such drug residues. In the U.S. alone, 5 billion medical prescriptions are filled annually and there is no regulatory requirement to control drug pollution, either during manufacturing or consumption, and just as little during disposal. The appropriate improvement of wastewater treatment plants, for example, by adding ozone to help eliminate chemical contaminants, is urgently needed. Only a few countries, including Switzerland, Sweden and Germany, have upgraded their wastewater treatment plants accordingly.

When consuming fish and seafood, therefore, the greatest restraint is required, not only for ecological reasons, but also for health reasons. Products from breeding farms should be avoided whenever possible for the above-mentioned reasons, because fish and seafood from organic farming also increase the pressure on wild catches. If the oceans continue to be plundered so ruthlessly, according to calculations by the UN environmental program Unep, commercial fishing will no longer be possible worldwide by 2050 at the latest. The promotion and implementation of sustainable fishing and the consistent fight against overfishing are the most urgent measures to stop this devastating development.

Be conscious of buying fish caught in regional inland and coastal waters, depending on the season. Always look for the highest quality, even if this may cost more. You should consistently avoid endangered fish species such as tuna. Tuna fishing also causes a lot of bycatch, such as dolphins, turtles, rays, whales and seabirds. Most of these animals die in agony in the fishing nets or are simply thrown back into the sea injured. The problem of bycatch should be kept in mind when eating (sea) fish and decide accordingly whether you want to support the extremely destructive fishing industry.

More Information on the subjects of sea and the oceans you will find here.