The Darwinian world view assumes that there is a constant competition between all living beings, in which the stronger wins. For a long time, this approach also applied to the woods. According to popular belief, trees fight for light, water, soil nutrients, and only those who ruthlessly prevail, win. “Darwin’s theory of evolution by natural selection is obviously 19th-century capitalism on a grand scale,” wrote evolutionary biologist Richard Lewontin. And indeed, recent research (read for example Erwin Thoma, Peter Wohlleben or Suzanne Simard) shows that our understanding of trees is fundamentally wrong and that their existence is not based on competition, but on cooperation.

In fact, trees are probably the best example of how everything is connected to everything. As studies show, trees, as quiet and immobile as they may seem to us, are in fact masters of communication. They not only have a consciousness of themselves, but also an awareness of everything that is happening around them, and they react to it in fractions of a second, if necessary. For one thing, they do this by means of (fragrance) molecules via their leaves, needles and bark, but the real action is happening underground. There is a true (worldwide) web of the woods. 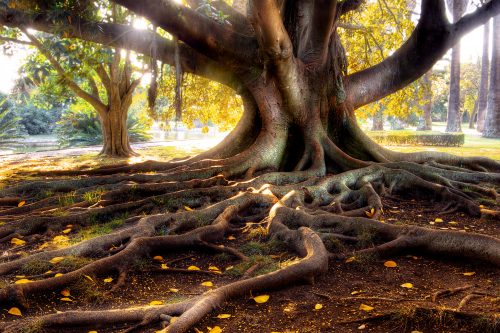 On the one hand, trees communicate with each other when their roots touch. On the other hand, the tree is constantly in exchange with countless soil organisms—after all, a teaspoon of soil is home to around one million bacteria and ten times the amount of viruses, much to the benefit of the forest. Trees have a particularly close symbiotic relationship with so-called mykkorhiza fungi. These surround every little root and all the roots among each other with a tight web of mycelium. In this fungal network, which in its complexity and intelligence can certainly compete with the human brain, information is constantly exchanged, but also, for example, sugar, carbon, hormones or antibodies. The largest trees in the forest form a kind of communication or neural node throughout the forest organism and are the most connected. Suzanne Simard, for example, was able to show in a study that a single large old Douglas fir was directly linked to 47 other trees, but was also connected to 250 more. When they had access to this network, seedlings were 26 percent more likely to thrive and survive than seedlings that lacked that connection. Because of their ability to literally nourish all the trees around them in this way, Simard calls these old trees “Mother Trees”; they are, so to speak, the matriarchs of the woods. For this reason, it is also extremely important that we take great care of these tree giants and do not cut them down out of pure greed for profit.

This exchange and communication described here takes place between all trees, no matter what species they belong to. The “Internet of Trees”, in contrast to that of humans, is a truly social network that serves the well-being and prosperity of the whole forest organism in a truly symbiotic way. This is undoubtedly another point which we can learn from nature.