In recent decades, humanity has expanded mobile radiation on land at a record pace. The technically generated microwave radiation strains our bodies and weakens the immune system by interfering with important processes at the cellular level and disrupting them1)Pall, Martin L (2018): 5G: Great risk for EU, U. and International Health! Compelling Evidence for Eight Distinct Types of Great Harm Caused by Electromagnetic Field (EMF) Exposures and the Mechanism that Causes Them, May 17, 2018. Plants and animals are unprotected and also exposed to this harmful radiation.

But that’s not all: If industry and the military have their way, no space on or around the world will remain free of mobile radiation. After the Earth’s surface, the vastness of space and the depths of the oceans are now also being equipped with mobile radiation. Humans thus intervene in processes and systems, the entirety and complexity of which, they are far from understanding.

Unnoticed by most people, the “conquest” of space with mobile phone satellites2)This refers to all transmitters that broadcast radio frequency (including Internet satellites). is in full swing. The number of mobile communication satellites already placed, approved or applied for approval in orbit is a whopping 441,4493)Firstenberg, A. (2022): 41,449 operated, approved and planned low-flying satellites. Cellular Phone Task Force, Newsletter from 5.1.2022 https://www.cellphonetaskforce.org/wp-content/uploads/2022/01/441449-Low-Earth-Orbit-Satellites.pdf. (For comparison: In December 2020, “only” around 3,400 active satellites orbited the Earth.) Of the 17,270 satellites already approved by the U.S. Federal Communications Commission (FCC), 11,943 belong to Space-X, tesla CEO Elon Musk’s space company. A further 30,000 satellites have already been applied for by Space-X. It wasn’t until December 2021 that there was a near-collision between one of Musk’s Starlink satellites and a Chinese space station. Space-X’s satellites alone have been responsible for around 1,600 near-collisions in space in recent months, per week!4) Future Zone (2021): Starlink satellites responsible for half of all near-collisions, 22.08.2021. Accessed on 20.1.2022 https://futurezone.at/science/starlink-satellit-crash-kollision-weltraum-orbit-spacex-weltraumschrott/401479528 It is probably only a matter of time before our irresponsible actions lead to a disaster. The increasing space debris must also be considered here.

The majority of satellites are Low Earth Orbit satellites whose orbit is at an altitude between 700 km and 1,500 km, i.e. in the ionosphere5)https://www.itwissen.info/LEO-low-earth-orbiter-LEO-Satellit.html, accessed on 14.1.2022. This sphere has high conductivity due to its high number of ions and free electrons, and it also regulates the flow of particles from the sun (solar wind) to Earth. The whole earth and every living being on it is electromagnetic in nature6)Becker, R.O. & Selden, G. (1985): The Body electric. New York, Morrow, 1985, Reprint 1987. Electrical currents are constantly flowing between the Earth’s surface and the atmosphere. Thunderstorms and other natural phenomena help maintain electrical balance7)König, H. L. (2012): Unsichtbare Umwelt, Der Mensch im Spielfeld elektromagnetischer Feldkräfte, 6. Auflage, 2012. How man-made technical radiation affects the ionosphere and thus the entire Earth’s atmosphere is uncertain. What happens when we intervene in this delicate equilibrium by generating artificial electromagnetic fields in the ionosphere and on the Earth’s surface? 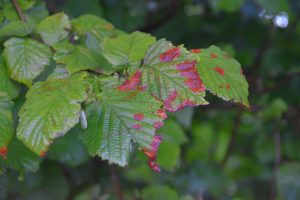 The trees give us an answer. As a good electrical conductor8)Johnson, B. (2013): The Ascent of Sap in Tall Trees: a Possible Role for Electrical Forces. Water Research Journal, WATER 5, 86-104, Nov 3 2013 the tree reacts sensitively to electromagnetic interference fields. Trees under mobile radiation stress lose their leaves, starting with the brown colouration at the leaf ends9)Schorpp, V. (2011): Tree Damage from Chronic High Frequency Exposure. First Symposium, The effect of electromagnetic radiation on trees, The Groene Paviljoen, Baarn, 18.02.2011. On the one hand, this could be due to a disturbed metabolism in or on the cell10)Pall, M. L. (2016): Electromagnetic Fields Act Similarly in Plants as in Animals: Probable Activation of Calcium Channels via Their Voltage Sensor, Current Chemical Biology, 2016, Vol. 10, No. 1, Bentham Science Publishers, as has already been shown in animal cells under exposure to microwave radiation11)Disruption of the voltage-dependent calcium ion channels at the cell membrane: An explanation in film and text under https://www.naturalscience.org/news/2021/09/water-the-elixir-of-life-threatened-by-radiation/. On the other hand, the brown colouration and withering of the leaves could also indicate a disturbed water balance. Water is very sensitive to electromagnetic radiation because it itself has an electromagnetic momentum. As can be shown with dark field microscopic images12)The World Foundation for Natural Science: Water – The Elixir of Life: Threatened by Radiation? An explanation in film and text under https://www.naturalscience.org/news/2021/09/water-the-elixir-of-life-threatened-by-radiation/, for example, the sedimentation behaviour of water changes significantly when exposed to WIFI radiation. (Detailed information can be found in our video contribution “Water as the elixir of life: Threatened by radiation?”)

Given the responsiveness of water to electromagnetic radiation, it is alarming that even the oceans and seas are now to be equipped with a dense mobile network. Industry and the scientific community are teaming up with the military to expand 5G (and upcoming 6G) technology underwater13)Steven Walker, S., Rice, D., Kahn, M, Clark, J. (2021): Why the World’s Militaries Are Embracing 5G, IEEE Spectrum, 11 Nov 2021. https://spectrum.ieee.org/lockheed-martin-5g.

The “SEANet” project, funded by the National Science Foundation, was launched in 2017. “SEANet” aims to develop a “new generation of underwater acoustic modems” that enable operation in a much larger acoustic bandwidth (0.01 – 2 MHz) than before. This is intended to “realize the vision of an Internet of Things under water”14)National Science Foundation: SEANet: Development of a Software-Defined Networking Testbed for the Internet of Underwater Things. Award Abstract # 1726512. https://www.nsf.gov/awardsearch/showAward?AWD_ID=1726512&HistoricalAwards=false, accessed on 15.1.2022 15)IEEE (2018): The SEANet Project: Toward a Programmable Internet of Underwater Things. IEEE, 2018 Fourth Underwater Communications and Networking Conference (Ucomms), 28.-30.8.2018, https://ieeexplore.ieee.org/document/8493207. This is expected to improve marine research, coastal surveillance and improved maritime safety.

The Institute of Electrical and Electronics Engineers (IEEE) also plays a decisive role in the expansion of communication technologies in the oceans. As “the largest technical professional organization for advancement of technology”16)“The world’s largest technical professional organization for the advancement of technology”, https://www.ieee.org/, accessed on 15.1.2022 the IEEE claims to want to “advance technology for the benefit of humanity”17)“Advancing Technology for Humanity”, https://www.ieee.org/, accessed on 15.1.2022. The recommendations of the IEEE are crucial for setting the mobile radiation limits in the USA, Canada and Taiwan. The IEEE’s latest favourite project is the “Smart Ocean”: the networked ocean and the “Internet of Things under water”. In the special booklet on the topic “Internet of Things for Smart Ocean” (published in October 2020)18)IEEE (2020): Guest Editorial: Special Issue on Internet of Things for Smart Ocean. IEEE INTERNET OF THINGS JOURNAL, VOL. 7, NO. 10, OCTOBER 2020. https://ieeexplore.ieee.org/document/9219274 , accessed on 20.1.2022, the IEEE outlines what this underwater Internet should look like.

The “underwater mobile radiation” uses frequencies of various kinds: In addition to acoustic, optical and radio waves, LED light and magnetic induction are also to be used19)See Endnote 3: Firstenberg, A. (2022. The seas and coasts can thus be fully monitored, which should, for example, enable complete environmental monitoring. But what is the point of environmental monitoring, which, under the pretext of wanting to protect the environment, intervenes in and disturbs it in such a way that there can no longer be any question of protection? Marine life is already under great pressure from industrial fishing, deep sea mining, offshore wind farms, sonar systems for locating submarines, noise from ship propulsion and oil platforms, (plastic) pollution and much more. 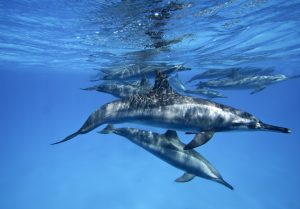 For example, noise in the oceans has doubled every ten years over the past 60 years. “Around 150 marine species have been shown to be affected by noise, so there is no longer any doubt that underwater noise is a harmful and serious pollution,” says Lindy Weilgart, marine biologist at Dalhousie University, Canada, and OceanCare consultant. “It would be absolutely irresponsible to add another source of constant and heavy noise without further exploring the effects and without making significant efforts to reduce the noise.” 20)OceanCare (2021): Underwater noise: The hidden danger of deep-sea mining. Media release on 22.11.2021.https://www.oceancare.org/en/underwater-noise-the-hidden-danger-of-deep-sea-mining/

The new underwater mobile networks are based, among other things, on sound (acoustic waves). Whales and dolphins, for example, communicate with each other over long distances by sound. Underwater noise prevents their communication possibilities. Environmental organizations have long warned that military sonar systems are killing marine life21)Slocum, J. (2009): Does Military Sonar Kill Marine Wildlife? Scientific American, 10.6.2009. Marine biologist Dr. Alexandros Frantzis attributed the stranding of whales in May 1996 to NATO sonar tests. He was also able to connect further strandings of whales to military manoeuvres.22)Wissenschaft.de (1998): Tod im Lärm. https://www.wissenschaft.de/allgemein/tod-im-laerm/ Such findings give an idea of how the sea creatures will fare if we allow the expansion of the “Smart Ocean”. The additional pollution from noise, light and electromagnetic radiation sources will make their lives even more difficult. The influence of electromagnetic waves on the structure of seawater is another question mark. No one can really estimate how the constant electromagnetic contamination will affect the extremely sensitive marine ecosystem – of which we have only researched and studied about five percent.

The seas and oceans with their inhabitants are extremely important for the survival of us humans. The oceans regulate the climate of the planet and produce most of the oxygen. Millions of people depend on a healthy marine ecosystem for their livelihoods. What happens when, through our ill-considered and selfish intervention, the oceans can no longer maintain their vital functions for the entire planet?