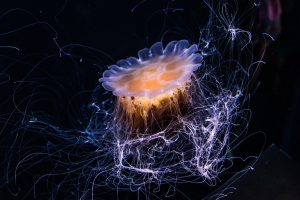 Every 8 June, the world’s population celebrates World Oceans Day1)https://worldoceanday.org/events/?category=all&country=all&online=false&startDate=all&endDate=all with numerous events and activities2)https://unworldoceansday.org/ to raise awareness of the essential importance of this vast ecosystem and the abundant life that calls it home. Around 230,000 species are known to exist in the oceans. Some scientists believe that there may be as many as 10 million species currently living in the oceans.3)2010 Professor Pedro Martínez, Director of Senckenberg research location (Wilhelmshaven, Germany) About 1.4 million species are thought to live on land. Still, only 10% of the marine area is currently protected. For land areas, the protected portion is 15%.

But the oceans not only provide a habitat for an immeasurable diversity of species, they also fulfil numerous fundamental tasks for the survival of the entire planet: 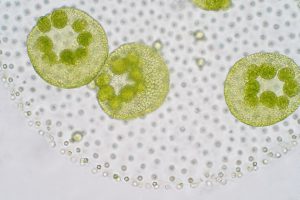 The plant plankton in the oceans produces up to three quarters of the oxygen in our atmosphere through photosynthesis. Moreover, the microscopically small algae are the nutritional basis for all life in the oceans. They are at the beginning of the food chain. For this purpose, they break down the mineral salts and carbon contained in the sea when exposed to sunlight. What remains is oxygen and organic substances, which then serve as food for many fish.

Thus, plant plankton, which is the main source of organic matter in the oceans, also plays an important role in the oxygen cycle.

In addition, the oceans absorb about a quarter of the CO2 released in the air through the exchange of gases on their surface. This is due to a concentration gradient between the air and the ocean: if the carbon dioxide content in the air increases, the ocean in a way catches up and also absorbs larger amounts of the gas in order to restore the balance.4)The Ocean Atlas, 2017, Heinrich Böll Stiftung: https://www.boell.de/en/oceanatlas Since the beginning of industrialisation and the associated burning of large amounts of fossil substances (including clearing of forests), the CO2 content of the atmosphere has increased by 40 per cent and is happening much faster than in the last 60 million years. The increased uptake of carbon dioxide from the atmosphere in turn causes acidification. Seawater is generally alkaline. When carbon dioxide meets water, it combines to a certain extent to form carbonic acid. The consequences of this acidification first affect calcium-shell-forming organisms (corals), whose ability to form protective shells decreases with acidic pH. The associated rising temperatures and increasing water pollution lead to a frighteningly rapid coral bleaching and the death of this ecosystem. Scientists estimate that the Great Barrier Reef, the largest living structure in the world, has lost about half of its corals since the mid-1980s. If this trend continues, it could shrink to 10 per cent of its former size or less by 2050.5)2014 Professor Ove Hoegh-Guldberg, The University of Queensland, Australia https://www.deccanherald.com/content/390204/barrier-reef-faces-irreversible-damage.html

However, the ocean not only absorbs a considerable amount of CO2, but also heat together with the CO2 – because CO2 traps heat. Ninety-three per cent of this heat is absorbed by the oceans. If the oceans did not do this, the average temperature on Earth would be 68 degrees Celsius.6)The Ocean Atlas, 2017, Heinrich Böll Stiftung: https://www.boell.de/en/oceanatlas 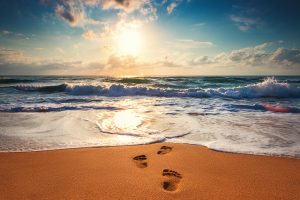 Against this background, it becomes evident what a central role the oceans play as a climate stabiliser. However, the excessive strain placed on this life-giving ecosystem has its price and is pushing the oceans to the limits of their capability. Protecting the oceans is thus not only essential for their own sake, but must become a top priority for the survival of our planet.

Large-scale ocean areas and the species living in them (each of which contributes to the balance of this enormous habitat because everything is connected to everything else in the web of life) urgently need efficient protection. Did you know that sperm whales, for example, play an important role as climate protectors? They promote the growth of phytoplankton with their excrements. This in turn removes carbon dioxide from the atmosphere, as explained above. Besides, one of the best antidotes to the excess CO2 on our planet is to plant trees, as we know that they convert CO2 into oxygen. By doing so, we also effectively support and relieve the strain on the marine ecosystem.

The imbalance on our home planet created by humans must primarily be brought back into balance through a respectful coexistence with nature characterised by love and respect. Any measures, no matter how well-intended, will therefore only remain inadequate piecemeal if they do not arise from the awareness that everything is connected and therefore every living being is unique and precious and must be preserved through consideration and care.