In 2018, the European Union launched a roadmap to which all of its citizens would need to carry proof of vaccination by 2022.1) The so-called pandemic of SARS-Cov-2 has given the EU nations and many other countries the opportunity to accelerate this agenda. Israel has introduced the Green Pass certificate to its vaccinated citizens which allows them access to gyms, hotels, theatres, pubs and more.2) Israelis who haven’t been vaccinated cannot enter into these places. Many of them are Hasidic Orthodox Jews who have refused to follow the Covid restrictions.3) Other nations have been heavily involved in promoting vaccine certificates, especially Greece4) who have also introduced them and are demanding such certificates before tourists can go to Greece for a holiday. Denmark and Sweden are also launching vaccine digital passports.5) The President of the Swiss Confederation, Guy Parmelin, has said that “everyone who wants to travel will need to be vaccinated in the future.” Anyone who wishes to enter Switzerland will soon need proof of vaccination.6) 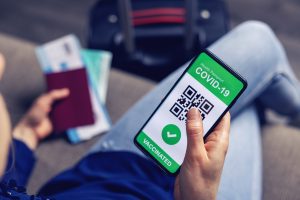 Australia is introducing a vaccine certificate and is likely to demand proof of certification for international travel.7) New Zealand is trialling vaccine passports with flights to and from Australia.8) The United States of America is in the process of developing vaccine digital passports, also.9) Soon every nation will be mandating these immunity passports for international travel and green passes to live a ‘normal’ life in their own countries. Are those who do not get the coronavirus vaccine – for whatever reason –deliberately being discriminated against? Austria is at the forefront of this. It is currently handing out yellow bracelets to those who have been vaccinated as a means of identification.10) Why are they needed? Is this act promoting the idea that you will receive special privileges because you have been vaccinated? The UK is handing out cards to its vaccinated citizens, telling them to keep the card on them at all times.11) Why at all times? Italy is promoting vaccine uptake through pink primrose gazebos, the idea being that those who have been vaccinated can think of themselves as the special flowers for a new future?12) China is proposing both vaccine passports and green passes for its citizens. If people wish to enter China, they may need a negative test result and a vaccine passport.13) Across the world, proof of vaccination is rapidly becoming a requirement to live a ‘normal’ life. But it is not normal. A normal life is one where nature provides the best medicine, people do not ‘socially’ distance, are not afraid to walk next to someone in the street and don’t cover their faces with a mask. This is normal. Masks are still a requirement even if you have been vaccinated. Social distancing is still a requirement even if you have been vaccinated. Is this really a normal life that people want? Is this the life you want?

The EU is also in the process of implementing the Green Pass scheme to be operational this spring or summer.14) In Germany, Chancellor Angela Merkel has stated the Digital Green Pass will be in operation before the summer. According to Merkel, all European Union member states are working to have digital vaccine certificates in place within three months.15)

There is some resistance to the introduction of Digital Green Passes among French and German communities because ultimately two classes of people will be created: those who have been vaccinated, who will have freedom to travel, to shop, to go to restaurants, even to work and to get an education; against those who have not been vaccinated who may not have any of these freedoms and rights. Governments are claiming Covid vaccines are not compulsory, yet are they deliberately making it almost impossible to live normally if you don’t get the vaccine? In Israel, the Knesset has agreed to give local authorities personal details of unvaccinated people to target them for inoculation.16) Spain’s government has declared it intends to create a database of those individuals in Spain who refuse the vaccine and will share this database with its EU counterparts.17) Is their intention similar to Israel’s and will this become the intention of all governments keeping such a database?

Nations such as the United Kingdom have been giving conflicting messages for months but the so-called Digital Green Passes are being proposed as official policy if people want access to cinemas, gyms, sports events and more. The UK is also proposing immunity passports for international travel.18) It is likely the UK’s track and trace app will be used as the green pass/vaccine passport for UK citizens as the app has been downloaded tens of millions of times already.19) Other nations may well also deploy immunity status into their track and trace apps.

In the wider world, The Commons Project20) , partnering with the World Economic Forum, has been working towards a globally integrated system for digital immunity passports, called the CommonPass app.

Whichever form the green pass or digital passport takes, people are speaking out against this removal of our liberty. In the UK, over 245,000 people so far have signed a parliamentary petition against vaccine passports.21) In such a way, the voices of the world can be heard. They are not alone. 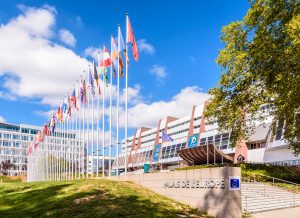 The European Parliamentary Assembly, in Resolution 2361 (2021)22) , also opposes the compulsory vaccination policies being imposed by the back door. The 2361 Resolution states:

“7.3. with respect to ensuring high vaccine uptake:
7.3.1. ensure that citizens are informed that the vaccination is NOT mandatory and that no one is politically, socially, or otherwise pressured to get themselves vaccinated, if they do not wish to do so themselves;
7.3.2. ensure that no one is discriminated against for not having been vaccinated, due to possible health risks or not wanting to be vaccinated;”
If these green passes and immunity passports become the norm across the world, then those who have refused the vaccine will be discriminated against.

What you can do

Make your voice heard with your fellow man, officials and politicians before it is too late. Write letters and inform people that with the introduction of these vaccine passports and green passes, their freedom will be removed. Tell politicians, schools, employers, friends about the EU Parliamentary Assembly Resolution that people should not be discriminated against in any way if they don’t get vaccinated. Our freedom to travel, to shop, to eat out, to play sports, will be reduced to nothing, if we do not act fast to stop this deliberate erosion of our liberty. As vaccine trials begin on children, on pregnant women and on babies, will those children not vaccinated be denied an education, will unvaccinated parents have their children banned from schools and sports clubs, will you be banned from entering your place of work, or from a supermarket? Every coming ‘pandemic’ will demand more vaccinations. Countries around the world are gearing up for so-called Variants of Concern, which will make all of us into pin cushions for the vaccine manufacturers.23) We must also ask what happens to our privacy when all our medical records are shared across governments, across global IT companies and whoever else? Are we allowing ourselves to be controlled by IT companies and governments through manipulation of our data? Are these immunity passports and green passes really worth the price of our freedom? If we want to live a normal life again, something must change and you and I, we, are the change!