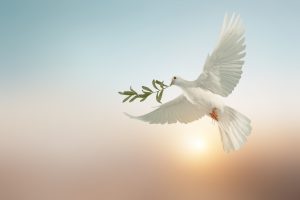 On Friday 22 January 2021, a milestone was set in the history of mankind. On this historic day, the Treaty on the Prohibition of Nuclear Weapons (TPNW) came into force. The treaty was approved by 122 nations at United Nations Headquarters in New York on 7 July 2017; to date, 86 countries have signed the treaty and 51 nations have ratified the agreement.

Countries that currently possess nuclear weapons can join the agreement, but in doing so they commit to destroying them according to a legally binding, time-bound plan. Countries that have nuclear weapons of another country stationed in their country (such as Turkey, Italy, Belgium, Germany and the Netherlands) can also join the treaty, provided they agree to remove these weapons from their land and soil within a specified period of time.

The Treaty on the Prohibition of Nuclear Weapons closes a significant gap in international law. Until now, nuclear weapons have been the only weapons of mass destruction not subject to a comprehensive ban, despite their catastrophic, far-reaching and lasting effects on man and the environment.

Under the impression of these terrible events, the U.N. General Assembly called for the prohibition of nuclear weapons for the first time on 24 January 1946. The Russell-Einstein Manifesto, published on 9 July 1955 and signed by renowned scientists – among them Albert Einstein, Bertrand Russell, Max Born, Linus Pauling and Frédéric Joliot-Curie – pointed out that nuclear weapons threatened the existence of the entire human race and that their continued existence could only be ensured by recalling one’s own humanity and making a conscious decision against armed conflict.

Ruling of the International Court of Justice: Nuclear weapons are immoral and illegal 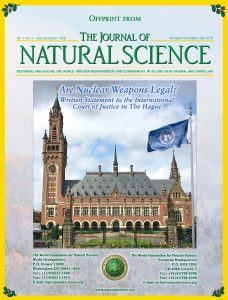 Few people know, however, that on 8 July 1996 the International Court of Justice, based in The Hague, passed an equally historic judgement. On 14 May 1993, at the Palace of Nations in Geneva, Switzerland, the 46th World Health Conference, the highest authority of the World Health Organisation (WHO), passed a resolution requiring the WHO to apply to the International Court of Justice for an expert opinion on the legal status of the use of nuclear weapons. Subsequently, the then UN Secretary-General, Dr Boutros Boutros Ghali, submitted the following question to the Court for advisory opinion:“Is the threat or use of nuclear weapons in any circumstances permitted under international law?” In a hearing, 22 states as well as the WHO made statements on this question, and the Court also received more than forty written submissions. The World Foundation for Natural Science, which has been campaigning for a ban on nuclear weapons since its foundation, also submitted such a statement to the International Court of Justice, which significantly influenced its judgement.

The International Court of Justice concluded in its judgment that not only the use, but also the threat of use of nuclear weapons is not only morally ostracized, but indeed represents a violation of international law, in particular the rules and principles of international humanitarian law. The Court also admonished the nuclear powers “to pursue in good faith and bring to a conclusion negotiations leading to nuclear disarmament in all its aspects under strict and effective international control”.

The ruling of the International Court of Justice was more than inconvenient for the nuclear powers and it is no coincidence that the ruling was largely swept under the carpet, as it clearly called into question the “balance of terror”, also called the MAD Doctrine (from the English “mutually assured destruction” with the double meaning of “mad”), which was propagated by the nuclear powers as a “peacekeeping” strategy.

A milestone has been set – but the work continues

The nuclear powers – Russia, the USA, China, France, Great Britain, Pakistan, India, Israel and North Korea – have not yet signed the Treaty on the Prohibition of Nuclear Weapons, which came into force on 22 January 2021, nor have the countries that are linked to the USA in a Defence Alliance, i.e. the NATO countries, Australia, Japan and South Korea.

As a population survey conducted by YouGov at the end of 2020 in six NATO countries – Belgium, Denmark, Iceland, Italy, the Netherlands and Spain – shows, however, the official position of these countries apparently does not reflect the opinion of the population. To the question “Do you think your country should join the UN Treaty on the Prohibition of Nuclear Weapons?”, more than 75 per cent of people questioned in all countries answered with a resounding yes, while the number of those in favour of the official position in each country was in single digits. Moreover, those questioned said they would also be in favour of joining the treaty if their country were the first NATO country to do so and also if their country were to be put under pressure by other NATO countries or the USA as a result of this decision. Furthermore, in Belgium, Italy and the Netherlands, which have US nuclear weapons stationed on their territory, popular support for removing these weapons from their territory was very strong.

The coming into force of the Treaty on the Prohibition of Nuclear Weapons is a partial victory, as is the fact that Russia has signalled to the new Biden administration that it wants to extend the New Start nuclear disarmament treaty, which expires on 5 February 2021. But more needs to be done. There are still some 13,400 nuclear weapons in the world (according to SIPRI Yearbook 2020, Federation of American Scientists), but a single nuclear bomb dropped on New York, for example, would be enough to virtually level the city and kill nearly 600,000 people. Nuclear weapons cause immeasurable suffering and particularly affect the civilian population. The association of “International Physicians against Nuclear War (IPPNW)” estimates that around 2.4 million people worldwide became ill with cancer and died as a result of the above-ground nuclear weapons tests carried out from 1945 to 1980 alone.

Moreover, the damage to the environment is immense. Less than 1 per cent of the world’s nuclear weapons could cause a so-called “Nuclear Winter” and destroy the entire ecosystem of the Earth. Since the 1940s, hundreds of thousands of tonnes of radioactive, highly toxic nuclear waste (from nuclear power plants, nuclear weapons or sunken submarines) have been dumped in the oceans. The radioactive substances contained therein, such as plutonium or uranium, have a decay time of millions, and in some cases even billions of years – a toxic mortgage for humanity and a threat to all life on this planet.

The pressure on the nuclear powers and on the 30 to 40 companies that produce nuclear weapons and missiles (e.g. Boeing, Airbus or Lockheed Martin) must increase to stop this life-disrespecting practice once and for all.