At present we are still in the middle of the annual flu season, which is currently dominated entirely by the coronavirus. While authorities and the media come up with new reports every day and everyone hopes for a new vaccination, hardly anyone talks about the extremely diverse possibilities that naturopathy, especially homeopathy, has to offer us for the prevention and treatment of immune deficiencies and flu-like infections.

In homeopathic treatment, it should be noted that not every remedy is suitable for every individual or for every stage of the disease. The remedies must therefore be in tune with the course of a disease. The respective symptoms can also differ individually and therefore require an appropriate choice of remedies.
Due to this complexity, we can only provide general information on the use of homeopathic remedies here. 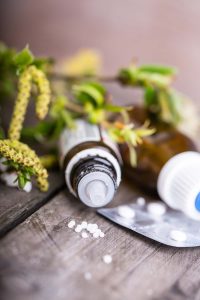 How should homeopathic remedies be used?
In general, the homeopathic potencies in D12 and C30 are very suitable for the prevention and treatment of influenza. The remedies of most homeopathic home pharmacies are usually found in these potencies. A single dose usually consists of 5 globules, which are given directly into the mouth every two hours. As soon as there is an improvement, stop taking the product. If the complaints recur, the remedy can be given again. In acute cases the dose may also be given every fifteen to thirty minutes. For mild symptoms, on the other hand, the medication is administered only 1 – 2 times a day, preferably in the morning and evening. If there is no improvement, an experienced homeopath should be consulted.

Which remedies can be used for flu prevention?

Ferrum phosphoricum: Suitable for the prevention of flu-like infections, especially if there are already infected persons in the vicinity. Particularly suitable for the first appearance of inflammatory symptoms such as dry cough, chest pain or inflamed mucous membranes and the first signs of fever. The remedy can be taken every 4 to 6 hours.

Influencinum: Can be taken four times a day as early as 1 month before the start of the flu season. Especially suitable for people who are exposed to a higher risk of infection through intensive contact with a large number of people.

Oscillococcinum: Well-known homeopathic preparation, which is taken once a week as a preventive measure, but can be taken several times a day at 6-hour intervals at the beginning of the flu. 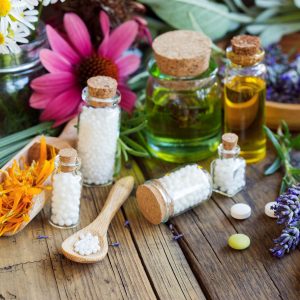 What can I do when the first flu symptoms appear?

Aconitum / Belladonna: Indicated in case of sudden occurrence of flu symptoms with headache, sore throat, earache and fever without sweating (often after exposure to cold). Dry cough is primarily treated with Aconitum. The follow-up remedy is often belladonna, especially when the patient begins to sweat due to intense heat, redness and pulsation.

What remedies can be used to treat flu symptoms?

Rhus toxicodendron: In case of fever and flu caused by cold, draught, cold and wetness. Especially suitable for symptoms such as hoarseness, sore throat and reddened throat. Characteristic is extreme restlessness with constant change of position.

Mercurius solubilis: Especially suitable for symptoms of the oral mucosa, aphthae, bad breath associated with sore throat and tonsillitis. Angina with difficulty swallowing after pus formation. Important: The skin is almost permanently moist, Mercurius is not the appropriate remedy for dry skin.

Natrium muriaticum: When sneezing and rhinitis with clear mucus, with loss of the sense of taste and smell and loss of appetite.

Ipecacuanha: For cough with nausea, tightness in the bronchi and bronchial catarrh with viscous sputum. Also suitable for pertussis and choking when coughing. Continuous nausea, does not improve with vomiting. Constant and violent coughing with every breath.

Hepar sulfuris: Especially for suppurations of the mouth and throat, angina and sinusitis, swelling of lymph glands and coughing with a choking sensation.

Pulsatilla: Especially suitable for people who are looking for a lot of affection (especially in the disease phase), also with thick green or yellow sputum. Also for people with rapidly occurring earaches and blocked nose.

Arsencicum album: In case of flu with a watery rhinitis, which changes to hard, yellow mucus as it progresses. May be accompanied by sore throat and lungs, with sputum stuck or coming loose. It is often accompanied by gastrointestinal problems, loss of appetite, headaches, weakness, paleness and thirst. It is more likely to be used in the subsequent stages in the course of a flu. Characteristic are irritable weakness, extreme restlessness and burning pain.

Gelsemium: Especially in case of flu with head symptoms, headache, pain in the forehead, joints and neck and fatigue. Shivering, chills and drowsiness are also part of the symptoms. “Gelsemium flu” usually starts slowly and then gradually builds up. As it progresses, mucus constantly collects in the throat, causing a dry cough. It is characterized by a marked weakening, often combined with dizziness and drowsiness.

Eupatorium perfoliatum: Works well for general flu symptoms with fever, chills. It is known as the “bone setter” because of the prompt relief of bone and muscle pain in febrile diseases. Especially typical is the sensation of exhaustion. It leads to irritable cough with an intense sensation of soreness in the chest. The sufferer has to hold the chest while coughing.

Phosphorus: It is characterized by a less painful but deeper cough than in Bryonia, with involvement of the bronchi. Very painful laryngitis. The patient is unable to speak because of pain. Cold air makes it worse. Lying on the left side makes it worse.

Kalium bichromatum: In the advanced stage of a cold, due to tough and encrusted mucus in the nose and airways breathing can be difficult, mucous membranes can hurt.

Vincetoxicum: For colds and viral flu, it has an anti-inflammatory and anti-irritant effect on the mucous membranes and the respiratory tract.