The city of San Francisco is to ban electronic cigarettes from sale in stores and online sales to addresses within San Francisco. The ban also prevents the manufacture, distribution and sale of e-cigarettes on San Francisco property. The ban has been put in place because the Food and Drug Administration (FDA) has not done its job in demanding that e-cigarette manufacturers submit for pre-market product approval. Juul Labs, based in San Francisco, and all other e-cigarette manufacturers across the United States have simply flouted the law by not submitting to FDA for pre-market approval and have been selling their products untested and unapproved in any official way.

Maryland Federal Court ruled, in a case brought by the American Academy of Pediatrics, the Campaign for Tobacco Free Kids, and other health groups, that the FDA must enforce the Family Smoking Prevention and Tobacco Control Act as it applies to e-cigarettes. In other words, e-cigarettes need to be tested by FDA and approved for sale, the same as tobacco. The FDA has been negligent in enforcing its own regulations and not one e-cigarette manufacturer has submitted for pre-market approval!

San Francisco recently banned the sale of flavoured e-liquids because of the recognition that they are attractive to children. Flavours like gummy bears, fruits and desserts are deliberately designed for this purpose. Given the high nicotine content of e-cigarettes, especially Juul, it is unsurprising that e-cigarettes have ensnared and addicted many teenagers, who are for the most part oblivious to the negative health effects of nicotine and the other ingredients found in e-cigarette liquids and vapour until it is too late. In 2018, the FDA declared e-cigarette use in high schools across the United States as an epidemic, where one-in-five students have tried or regularly use an e-cigarette.

Despite some governments claiming they are nowhere near as harmful as tobacco, e-cigarettes do contain many toxins and carcinogens – at similar levels found in tobacco in some cases. E-cigarettes are also very popular for vaping cannabis among the youth, which is recognised as causing permanent damage on the brain. E-cigarettes don’t typically help people quit smoking – smokers instead tend to vape where they can’t smoke and continue to smoke where they can. Recognised as a cause of heart disease and lung disease, e-cigarettes are also proven to be a gateway to smoking tobacco cigarettes among high school students.

On June 27th 1957, the BBC published an article showing that smoking tobacco cigarettes directly causes lung cancer. The article reported that politicians would not ban smoking because they would need a different income to replace the hundreds of millions gained every year from tax. Even today, some 62 years later, very little has changed in that mindset. It is estimated by the UN that some 10 million people will die from smoking in 2020.

This is why e-cigarettes are so alluring. The promise of no carbon monoxide, a key component in smoking, has pushed some governments and scientists into believing e-cigarettes are safe. But this is definitely not the case. Indeed, vaping is prolonging the smoking epidemic. A recent public health review of e-cigarettes recommended that children be cautioned against e-cigarettes use in the same way as they are against tobacco and that there should not be any health claims made about them until genuine scientific reviews are actually conducted.

There is nothing trendy or good about electronic cigarettes. San Francisco’s strong stance against the tobacco industry – who are the e-cigarette industry – is applauded. The City of San Francisco has recognised that the safety of electronic cigarettes has not been proven and that the evidence actually points the other way, that e-cigarettes are really not much less harmful than tobacco. 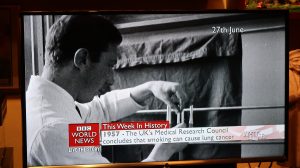