Genetically modified organisms (GMO) are slowly but surely creeping into the supermarkets of the UK. They are appearing especially in sweets and chocolate bars imported directly from the US. The Government of the United Kingdom is a strong supporter of genetically modified foods. Despite the majority of the European Union voting against approval of further GM crops to be grown in EU for commercial purposes last month (March 2017), the UK voted in favour [1].

As the UK has chosen to leave the European Union, the UK Government has made it clear it wishes to make it easier legally to grow genetically modified crops [2]. Despite all the science showing GMO to be toxic [e.g. 3], the cost of introducing GMO to be astronomical compared to natural farming [4], and the length of time it takes from the laboratory to the dinner plate to be no different to the natural introduction of a new crop trait [4], the UK Government persists in pushing GMO onto its people, who do not want it, and are protected by EU legislation against it; even Parliament itself banned GMO from its own restaurants! [5] GM farming results in higher usage of pesticides all of which are poisonous to nature and man, produces lower yield crops that could not have been made by the Nature Kingdom, and contains less nutrients, different nutrients and toxins [6]. 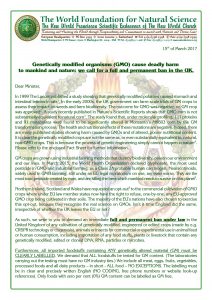 On ‘BREXIT’ the UK Government plans to turn EU law into UK law so it can repeal or weaken it [7]. For GMO this will allow the Government to more easily introduce this dangerous industrial farming.

The UK Office of The World Foundation for Natural Science has written a strong letter to every member of the House of Commons – elected Members of Parliament – demanding the complete ban on any commercial or scientific GMO farming or research. Also included with the letter was the GMO Fact Sheet [8].

It is such this action that we can bring the truth to many politicians who may not know what is happening with GMO, nor realise how deadly they are. It is our goal to see a full and permanent ban on GMO in the UK and worldwide.