Monsanto, the world leader in genetically modified food production and the herbicide glyphosate, recently classified as a class 2A probable human carcinogen by the WHO, has made an offer to acquire Syngenta, producer of the highly toxic neonicotinoid pesticide family.

Syngenta has rejected the $45 billion purchase offer from Monsanto, but the prospect of a higher bid or a merger is still on the table. If these two companies combine, it is most likely there will be further increases in industrial monoculture farming, GMO and pesticide use globally. 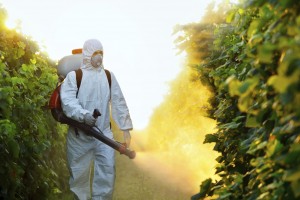 According to Bloomberg, Monsanto needs to get public opinion back on its side rather than reshape its business. But Monsanto has, through its history, as reported in The World According to Monsanto by Marie-Monique Robin, repositioned itself to avoid legal problems with its most dangerous products by incorporating these business lines as separate legal subsidiaries. If, as has been suggested, Monsanto were considering relocating its head office to Switzerland, it may be to avoid mounting pressures from the public and regulators in the US.

Dr Mercola highlights how both Syngenta and Monsanto’s pesticides have come under further scientific scrutiny. Syngenta’s neonicotinoid has been categorically shown to kill pollinating insects, especially bees. Its herbicide atrazine is banned in the EU but is still sold in the US despite its recognition as an endocrine disruptor. Monsanto’s glyphosate has just been classified as a probable human carcinogen by the World Health Organisation1.


Referring to this classification, Switzerland’s biggest retail companies (Coop and Migros) banned the glyphosate product Roundup; other companies will most probably follow2. As a random sample showed, 20 of 40 people in Switzerland have glyphosate in their urine3. In the US and elsewhere, thousands of schools and communities abutting GMO and conventional crops sprayed with pesticides are beginning to show serious concern over the health effects on children.

There is mounting global pressure to eliminate these deadly pesticides from use, something neither company wants to see.

If a merger or acquisition occurs we will likely see a reduction in biodiversity as fewer seed varieties will come to market, a greater push for GMO, and increased pesticide use. None of these are good for the planet’s health or for ours. As Bill Freese, analyst for the Center for Food Safety states, “From a public health and environmental perspective this is a complete disaster.”