“Live in harmonious accord with nature” 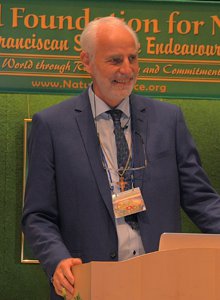 The European President of The World Foundation for Natural Science, The Very Rev. Dean em. Paul Probst SF, explained in his welcoming remarks that harmony does not mean calm, silence, or stagnancy, but rather constant movement. Nature is, in fact, a key and a model for man, since it always changes, strives and develops further and is accordingly in harmony. It is the will of man which decides whether he contributes to this harmony or instead creates disharmony. 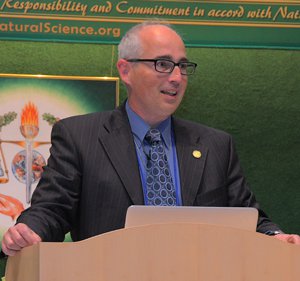 In the US alone, the number of e-cigarette consumers has risen from 2.5 million in 2014 to 9 million in 2016. The market value of e-cigarettes tripled in the same period and is now 9 billion US dollars. A study in the renowned journal “Pediatrics” (July 2016) shows that young people who try e-cigarettes are 6 times more likely to start smoking tobacco cigarettes than young people who do not smoke e-cigarettes. In general, the consumption of e-cigarettes reduces the likelihood that smokers will quit smoking by about a third. E-cigarettes are not only harmful to the actual consumer, but those passively inhaling this vapour are also harmed by the toxins in the vapour. In fetuses, changes occur in the gene expression in the frontal cortex due to “co-smoking” that can cause ADD, ADHD and schizophrenia. E-cigarettes should be treated exactly the same as tobacco cigarettes with regard to prevention and prohibition: they should be banned. 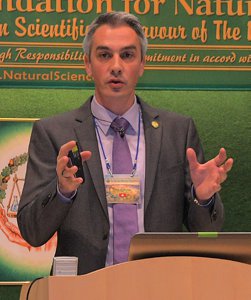 Of eight essential sugars, we typical consume only two in the Western diet, namely glucose and galactose. The assertion that the body can produce all the other kinds of sugars from glucose is theoretically correct. Yet, for this the body has to accomplish the enormous achievement of 15 enzymatic intermediate steps. Because of the typical strains of modern life such as continual microwave exposure, stress or environmental toxins, the body is not able to do this. However, help is available in the form of glyconutrients. As Lukas Waldmann, a naturopath, explained, glyconutrients are the mediators for healthy cell communication as these eight essential sugars are indispensable for communication and metabolism between the cells. Glyconutrients can also protect the cells from toxins or bacteria and are essential for an intact immune system. Glyconutrients, which are formed by photosynthesis, are not a cure, but the necessary key required so that the body can heal itself. The aloe vera plant, seaweed, turmeric, bran / wholegrains, pectin, oyster mushrooms, Echinacea and mother’s milk are particularly rich in glyconutrients. 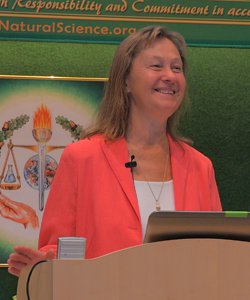 The neurologist and nutritionist Dr. Natasha Campbell-McBride explained in her presentation that 85% of our immune system is in gut. Our intestinal wall, which is about the size of a tennis court, is covered by a thick biofilm with countless microbes, similar to the soil covered with plants. In a healthy gut there is a harmonious balance between the various microorganisms. If this harmony is disturbed by factors such as antibiotics, the pill, stress, radiation, toxins or deficient or incorrect diet, disharmony arises; that is, an imbalance in which certain microorganisms take over, the result of which is disease. The majority of the population has a disturbed gut flora that is associated with diseases such as arthritis, autoimmune disorders, intestinal and digestive problems, allergies, asthma and eczema, hormonal disorders, nervous system disorders (migraine), and food intolerances. They all have what Dr. Campbell-McBride defines as “GAPS”, the Gut-And-Psychology-Syndrome. This problem can be tackled with the GAPS nutritional protocol. GAPS nutrition includes eating many healthy animal fats, fresh fruit and vegetables while abstaining from gluten and industrially processed foods, and especially processed sugars and flours. The moderate use of food supplements, sunbathing and detoxification are also part of the protocol.

In his second lecture, Lukas Waldmann, naturopath, demonstrated that the cholesterol hypothesis proposed by Dr Ancel Keys, that high cholesterol causes heart disease, has been proven wrong many times. The classification of cholesterol into “bad” LDL and “good” HDL is nonsense. Both are transport molecules for cholesterol, with LDL transporting cholesterol from the liver to cells and HDL taking it back. Cholesterol is essential in the human body because it is involved in many processes in the body: hormonal balance, conversion of sunlight into vitamin D, bile acid, construction of the cell walls especially in the brain, nutrient transport and repair mechanisms. Only 15% of cholesterol comes from diet; 85% is produced by the body itself. Dietary remedies lead to a reduction of cholesterol levels of just 2%. Cholesterol is also not the trigger for arteriosclerosis, which is an inflammation of the vessel walls. By absorbing cholesterol, the body prevents the bursting of the bloodstream and thus life-threatening internal bleeding. A high cholesterol value is in this respect a pointer to inflammation in the body, which in turn is in many cases associated with a disturbed intestinal flora. Chemical cholesterol reducers, so-called statins, thus hinder the repair and emergency program of the body. Nevertheless, 220 million people worldwide take statins, 75% of whom for primary prevention, that is, without having any cardiovascular diseases. Science has shown that this preventive intake of cholesterol reducers has no effect on life expectancy at all. For the pharmaceutical industry, however, statins are their biggest selling drug, with a worldwide annual turnover of 29 billion US dollars.

In her subsequent speech, Dr. Natasha Campbell-McBride explained that the so-called diet-heart hypothesis, which claims that cholesterol and animal fats are responsible for heart disease, has been disproved for 30 years. Saturated fatty acids are essential for the energy supply of the heart muscle, the immune system, brain function and wound healing. Studies show that people with a high cholesterol live the longest (elderly people need a lot of cholesterol to support the brain function), whereas a low cholesterol level increases the risk of heart disease and stroke. Also diseases such as Alzheimer’s, Parkinson’s disease and cancer are associated with low cholesterol levels, as well as an increased risk of aggression, violence, suicide or learning difficulties. The true cause of cardiovascular disease is the metabolic syndrome caused by a glucose overload of the body due to the consumption of industrially processed carbohydrates (sugar, bread etc.). As a result, the body is in a state of continual inflammation. The natural prevention of cardiac diseases comprises of 1) the removal of industrially processed foods from the diet; 2) not to burden the body with toxins of any kind (including detergents, personal care products, mobile communications radiation …) and 3) to ensure a healthy digestive system. 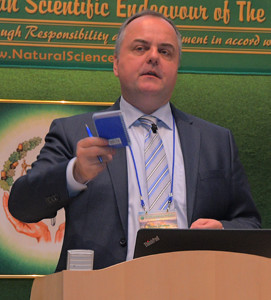 In his speech on Image Streaming, Dietmar R. Schumann, a certified trainer in the Image Streaming Methodology, explained that the idea that the human brain was fully developed at the age of about 18 and cannot be developed further afterwards is now outdated. Brain research has recognized that the brain has the lifelong ability to change according to what is required and that it can be trained like a muscle. It is also known that with a trained brain the risk of dementia drops. Exercise, sleep, meditation or reading are beneficial to brain development, in contrast to multitasking and consumption of industrial sugars. Brain research is also more convinced that human consciousness is not located in the brain, but rather in the heart. Since spirit controls matter, and Albert Einstein has already recognized the fact that imagination is more important than knowledge, there is great potential for the development of problem-solving and learning strategies as well as new thinking approaches in techniques such as Image Streaming devised by Dr. Win Wenger. The conference participants had the opportunity to learn about such brain training and awareness techniques by means of many practical exercises. 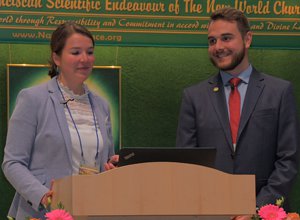 Isabelle Schneider, teacher and social worker, and David Seiler, editor, drew attention to the horrifying fact that 30-40 per cent of kindergarten children are showing signs of behavioural problems and often cannot be enrolled in school according to their age. Digital media as well as wrong diet are two main causes for this. They showed the frequent use of digital technologies such as the Playstation, TV, and tablet computers affects the learning ability of children, as social contacts and the proverbial “comprehension” of the world are indispensable for the child’s development. The fact that, according to US studies, 8 to 18-year-olds spend an average of 7.1 hours a day in front of a screen, and meanwhile 2.31 billion people worldwide use social media (80% of which is on mobile devices) while one-in-two 4 to 12-year-olds in Germany has never climbed a tree and every fourth child has never seen a wild animal, should be cause for reflection. The speakers therefore advocated a responsible approach to screen technologies, which should not be prohibited, but have clear rules for usage and duration of use, balanced with having natural experiences, having a pet and real interpersonal contacts. 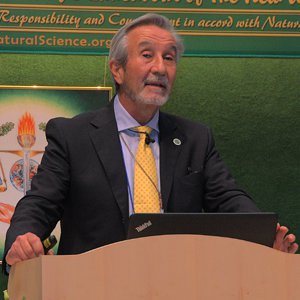 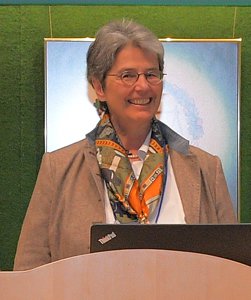 Sandro Künzle, business consultant and farmer, together with Cornelie Thomas, certified mathematician and certified music teacher, showed that the advent of music styles such as heavy metal and rap went along with the disintegration of moral social values and an increase in the propensity to violence. They explained the effects of this so-called ‘violence music’, which has even been used as a weapon of war to crush the mental morale of the opponent, on the brain and on the structure of society. Today it is known that music is processed not only in the right hemisphere of the brain but in the entire brain and is connected strongly with the emotions. What’s exciting are phenomena such as where people with brain damage are sometimes not capable of buttoning up a coat, but can still play the piano. The “Mozart effect” – the assertion that the intelligence can be increased by listening to Mozart’s music – cannot be proved, but studies show that, for example, music classes in school improve the social behavior of the children attending. Since music is almost everywhere where people come together, it is called the “most social” of all the arts. 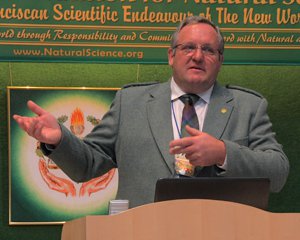 In the final session of the congress, Jörg Dossenbach, farmer, illustrated to the congress participants how the visionary method of climate farming can help counter the advancing spread of steppes and deserts, triggered by the soil-exploiting methods of industrial agriculture. However, soil treated with biochar, which is obtained by pyrolysis and which promotes the capacity for more water storage and permeability of the soil, as well as other soil improvers such as primary rock flours or compost does increase the soil humus content and restore its fertility. Measures such as planting tree rows and hedges as well as mixed crops rather than monocultures also help to feed the soil rather than merely fertilize the plants. At the same time, climate-damaging gases such as ammonia or methane are greatly reduced by the use of biochar.

What our participants say

A great heartfelt “Thank you” for all involved. As always: very good, game-changing and an eye-opener. Your engagement and enthusiasm is contagious. A good reason to pass it on!Suely M., Germany

Thank you so much for another outlook and such interesting topics! It is always a time for growth, learning, sharing and exchanging with the other attendants! There is a noticeable difference from other events and congresses. And much to bring home and to apply!Odile L., Austria

This was the best congress in years, very well structured. Refreshing, uplifting, genuine and natural! Thank you so much for your tremendous dedication!Susanne B., Switzerland

Doctor Natasha – absolutely astonishing lecturer and her lecture was so simple, so clear, so emotional! I’ve got a strong impulse to make a stop on my way and change my lifestyle. Thank you for that!Marina K., Lithuania

Simply content, happy to have had the opportunity to attend this congress once again. Enriched, with many new impressions, I will go back home. Many thanks to the excellent lecturers!Brigitta H., Switzerland

On many levels a trend-setting congress that not only gives a new outlook but also hope and visions (which will become reality). The lecture of Jörg Dossenbach particularly touched me. Thank you for this congress. Ulrike P., Germany